We had a quite calm and neutral week. This week, we do not have a significant week for data/ decisions, just Jobless Claims and Chicago PMI.

So let’s take a look at what happened the previous week:

The Weekly Performance of the S&P 500 Index: 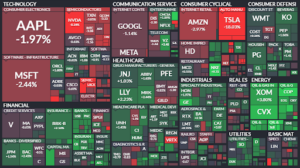 Netflix shares plunged after the reports showed that the ad-supported plan is getting less attraction than expected.

Despite beating expectations in its latest quarter, the consulting firm’s stock price declined. The company also provided guidance for the current quarter with a revenue range that fell below current estimates and stated that the impact of the stronger U.S. dollar will negatively affect its fiscal 2023 results by 5%.

TIL: What is Core PCE Price Index?

The core PCE price index is a measure of inflation that is released as part of the Personal Income and Outlays report. It excludes the categories of food and energy, which tend to have more volatile price movements, in order to better reflect the overall trend of inflation. This index is closely monitored by the Federal Reserve when making decisions about monetary policy.

The last week was pretty much terrible for the investors. We will see how the investors will behave after the Jobless Claims and Core PCE Price Index.

What to do during an economic downturn?