We had a horrible week for investors, primarily due to the PPI data being hotter than expected, suggesting a more hawkish stance for the FED.

The hottest topics were basically this PPI and Core PPI number. It has set the course for the week and the week closed in anticipation of a more hawkish FED.

This week, we have a significant week for data/ decisions; We have the CPI and the Core CPI data announcement on Tuesday and the FED’s interest rate decision on Wednesday. So let’s take a look at what happened the previous week:

• China gradually decreased the COVID restrictions following the anti-lockdown protests.
• US Services PMI came out as 46.2 —0.1 points better than expected.
• US PPI rose to 7.4% year on year —0.2% worse than expected.
• US Core PPI rose to 6.2% year on year —0.3% worse than expected.
• Stocks and commodities plunged, and the dollar rallied after the hotter-than-expected PPI numbers.
• JP Morgan CEO Jamie Dimon said a mild or hard recession could happen next year.
• Goldman Sachs CEO David Solomon said he and the clients are cautious about the economy.
• Wells Fargo CEO said consumer spending is slowing down.
• US 30-year bond fell below 3.5% —the lowest level since 2021.
• US Michigan Consumer Sentiment rose to 59.1 —3.1 points better than expected. 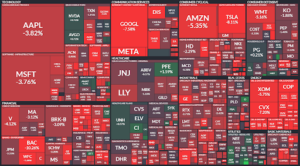 This week pretty much all of the stocks went down, so we don’t have any positive returns for any of our stocks this week.

ConocoPhillips is on the list again. It is basically due to the same reasons as two weeks before, and the down-trend for the energy prices.

Schlumberger Limited had almost $6 million insider sale, we believe that was basically the main reason for it. Also, it is quite normal for the SLB to go down when the market is down since it has a Beta of 1.8 thus being a volatile stock.

TIL: What is Beta?

Beta measures a security or portfolio’s volatility or systematic risk in relation to the market as a whole (usually the S&P 500). Generally speaking, stocks with betas greater than 1.0 are thought to be more volatile than the S&P 500.

The CPI, the Core CPI, and the FOMC interest rate decision.

After the disastrous PPI data we saw last week, markets are confused despite lowering energy costs and high-interest rates, and now the anticipation for a less-hawkish FED is gone. However, the FED generally takes Core CPI into consideration more, so this week it will be the most crucial data for the investors.

A higher-than-expected number would create chaos in the market by creating an expectation of a more-hawkish FED.

On the other hand, a lower-than-expected number would relieve the investors worried about last week’s PPI data.
We will see how the investors will behave after the crucial Core CPI level. And if there won’t be any surprise, the FED decision on Wednesday will determine the closing prices.